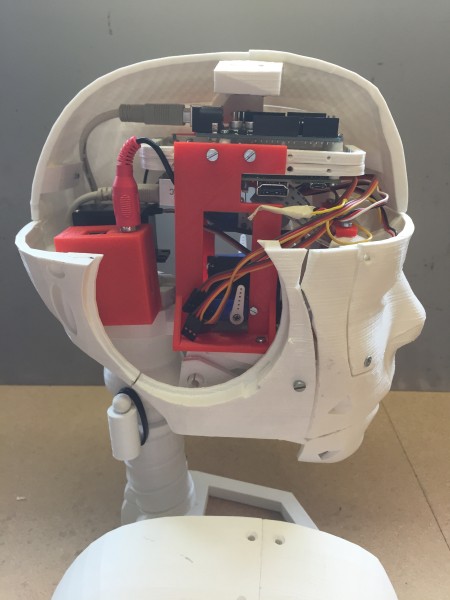 I had several ideas when I started to print the head. The large servo was more expensive than a small, so I tried to replace it with a standard size sero. I also wanted to mount a better camera in the head than a USB camera. My modified head contains a Raspberry PI 2 with a Raspberry Pi Camera module mounted in one of the eyes. It also contains an Arduino Uno to drive the servos. Since the Raspberry PI doesn't have a microphone, I mounted a USB soundcard in the head too. The soundcard is connected to an amplifier and a speaker that is mounted behind the mouth. So I had to redesign the jaw mount and move the jaw servo to a different location. It also contains a USB wireless mouse/keyboard dongle. Since I was already making so many changes, I decided to use the modified neck that Bob Huston designed.The Raspberry PI 2 runs the Myrobotlab software, so the head can be used standalone without any external computer.The head is almost finished. Left to do is to connect the eyes to the servos and connect the servos to the Arduino. Then it's time to program it.