Just, one day!
Can you imagine fifty 3D printers working at the same time to produce InMoov in one day.
Builders actively organizing the files to be printed,
Hackers getting the parts ready and preparing the program in one day.
The result should be a World Record Event (according to Ground3D) which will take place on the 25 of may in Utrecht in the Nederlands.
This is an event organised by the Protospace Fablab in Holland.

If you can read dutch this is for you:  LINK.
If you can’t read dutch, use the Google translator. 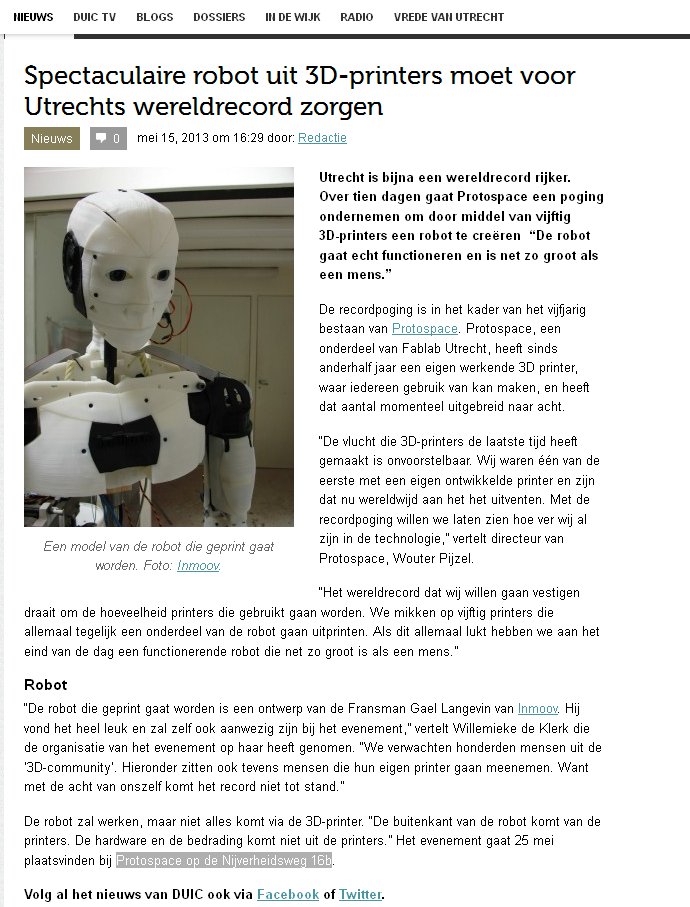 This is very exciting!
I have been contacted by Ground3D which has been printing InMoov parts since a while.
When they first contacted me I wasn’t abble to pick up the phone so my wife did. They must have been surprised to get someone who could converse with them in dutch. (She is from Holland)

So the plan is to dispatch all the files on 50 different printers, it is possible that some very long printing parts will be started the previous day. (Just in case) They seem to know a bunch of hackers, which will prepare and assemble the parts once they are printed. Some other hackers will organize all the wiring and programms. We still need to see if they plan on using MRL and Arduinos, but I really hope so because it is part of the force of InMoov.
I will let you know more when I get more info.
I will certainly try to attend this event although it isn’t that close by. I wonder why this just doesn’t happen here in Paris, it would be so much easier…

In France, there is a blob in Science & Vie junior in the 284 issue. Apparently, it leaded them to make a full article about robots in the next issue (285). She looks like InMoov’s wife.. 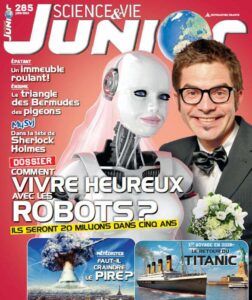 In the meantime during the nights, I keep on working.
It’s been a while that I want to test a finger sensor. J Ha, an Australian InMoov builder, has been busy making some sensors for the hand, his last video is very interesting because he has done a mechanism where the whole servo moves according to the pressure. J Ha also has printed almost the whole robot, so according to him, he will soon let us know how he did this sensor mechanism.
I had found on the Instructables a very simple and cheap way to create sensors, so cheap that I had to try it.
So I got myself some of that antistatic foam used to protect circuits from shorting.
A board of 40cm X 25cm X 0.5cm cost 3 euros.
I have cut two disks of copper in the diameter of the finger and another disk in the foam.
The copper I had it laying around my workshop, aluminium foil can be used as well. I ran two very thin wires through the hinges up to the tip of the finger, soldered them to the copper disks, if you use aluminium foil you won’t be able to solder it.
Then I sandwiched the foam between the copper disks. Using a two component epoxy glue on the outside of the disks, I managed to glue it all together preserving the spongious effect of the foam. Writing a script in the Arduino.exe took me a lot of time, that’s why I got to bed only at 4 AM. All the scripts I would find on the net were about how to make a servo move when triggering a pressure sensor. But my goal was different, I want the servo to stop moving when the sensor gets a certain amount of pressure, plus I wanted to be able to visualize how reactif was my DIY sensor, to make the servo act in accordance.
Another problem I had with the script was to slow down the servo during it’s movements to get relevants values out of the sensor. If the finger goes very fast and hits the objet strongly isn’t the same factor is if it encounter the object softly.
The script is still not correct but I got to see what I wanted.
I also used the Oscope in MRL to see what curves it would produce and what was the minimum and maximum values. The result of the Oscope, here, shows a min value of 0 and a max of 347 which seems pretty good to me.
This was obtained by pressing firmly and releasing the finger tip.
I had never used the Oscope of MRL and it is a fine piece of the software which can be very handy.
Bellow is a little video done at the request of Grog, because this way he can maybe integrate and adapt the script in the InMoov Service with Python.

Now, I have ordered some QTC pills sensors which are ridiculously cheap and will modify the finger tip to improve the pressure impact direction. Users will be able to just remove the finger tips already printed and add that modified finger tip to simply benefit of a pretty effective sensor.

The other night I was for the second time testing the recently rebuilt tracking service in MRL and somehow I got to burn my second Hitec HS805BB. According to Grog I shouldn’t test it anymore until something is fixed in the service. I guess I will listen to his advise.
The servo goes beyond it’s range for some reason. Expensive tests…30 euros to the trash.
Replacing the RotHead  servo in the head gave an odd and creepy feeling in the worshop the other night… 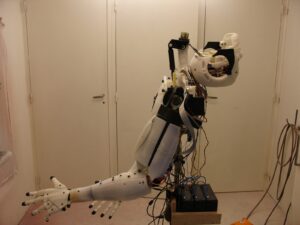 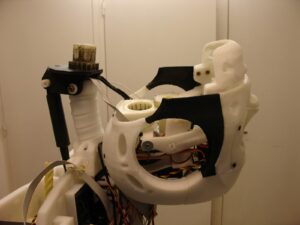