Here is “InMoov”, the first life size humanoid robot you can 3D print and animate. You have a 3D printer, some building skills, This project is for you!! Gael Langevin is a French modelmaker and sculptor. He works for the biggest brands since more than 25 years.
InMoov is his personal project, it was initiated in January 2012
InMoov is the first Open Source 3D printed life-size robot.
Replicable on any home 3D printer with a 12x12x12cm area, it is conceived as a development platform for Universities, Laboratories, Hobbyist, but first of all for Makers.
It’s concept, based on sharing and community, gives him the honor to be reproduced for countless projects through out the world.

Parts for downloads are licensed under the Attribution – Non-Commercial – Creative Commons license.

It Takes a Village to Build a Free, Open Source, 3D-Printed Robot 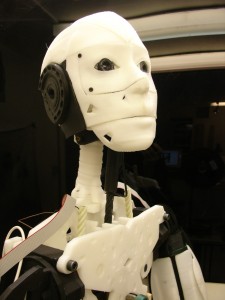 When I asked to interview Gaël Langevin, he described himself as “pretty much like a bear in a cave”, someone who would prefer to tinker around in his workshop rather than socialize.  Gaël, however, has built something that not many amatuer tinkerers have.  Without any robotics experience, he has put together a free, fully functional, open source, 3D-printed robot. You can actually download most of the parts to construct this robot yourself off of Gaël’s website, InMoov.blogspot.com.

By the time I had come across his blog detailing the building process, he was already making the head and it was exactly like something out of a movie adaptation of a Philip K. Dick novel, this extremely realistic, human face in translucent white plastic – something to make you question what it means to be human.  The whole project had gone from a simple hand replica to a torso, arms, and head in a matter of eight months.  Gaël had been consulted to make a modern-looking prosthetic hand for a commercial photo shoot.  Because he recently acquired a Touch FDM 3D Printer from Bits from Bytes, he thought he’d try to see how realistic a hand his new 3D printer could create.  The film shoot job was eventually cancelled, but Gaël was still left with the idea of printing the limb.  After successfully accomplishing the task, he decided to incorporate servos and an Arduino to yield a programmable, electronic hand.  The product was a resounding success.  He could press keys on a keyboard to cause the individual fingers to move at varying speeds.  Though the commercial job didn’t pan out, he posted his product to Thingverse and was amazed at the encouraging responses. Thingverse users loved the limb he had created, started printing and building their own versions, and wanted to see more.  So Gaël built more. 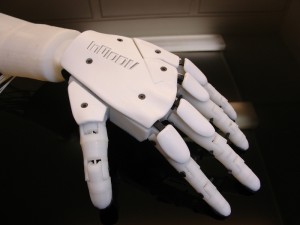 Even as a child growing up in France, Gaël was handy.  “My parents always let me use any tools I wanted, even electrical ones. It was the 70′s and they were cool and very handy themselves.” As is the case with many precocious youths, Gaël had a difficult time learning the prescribed course material in school, saying that “teachers always bored me; it is like they never had the subject I was interested in.”  His parents helped him enter art school when he was 15, where he was able to excel in sculpting.  And, today, Gaël runs his sculpting and model-making business, Factices, in Paris.

Luckily for the self-described autodidact[1], the Internet is proving to be a powerful tool for those who are uninterested in the education provided by mainstream sources.  With Blender (the free, open source 3D modelling software), for instance, there are a multitude of tutorials that can lead users step-by-step through the model building process.  And, with the vast supply of tutorials on any given subject throughout the Internet, Gaël explains, “You can go to the essential on what you want to learn, but you also get extra info about things you wouldn’t have searched for. I’ve been fooling with Blender for two years, now, and discover new stuff all the time.”

When it came to the programming of InMoov, Gaël found that he could learn from the expertise of others in the online community.  He has been using Myrobotlab, an open source, Javascript-based software used to program a variety of devices in various ways.  Gaël, however, has no real robotic engineering or Arduino experience. “Asa model maker and prop maker, I have had to face all kinds of demands, but I never pushed into electronics because it wasn’t my strong suit. I was always impressed with animatronics, but, at the same time, intimidated by the electronics, since I had no knowledge about them.”  In order to overcome his shortcomings in programming, he’s been getting help from GroG, the admin of the Myrobotlab forum.  According to the InMoov blog,

http://inmoov.blogspot.co.uk/”>I had tried to use [Myrobotlabs] a few times, trying to figure stuff out on my own, but I finally decided to contact him. And boy, what a help! The GUI still remains opaque to me, but since I had been fooling around with Arduino scripts since January, I was ready to jump into Python scripts. At my very low level of knowledge, of course. GroG has been helping to figure out many problems I had with scripts, but mainly has been working on creating a special service in his software for InMoov.

This means that, if you have printed, let’s say, the hand and forearm and set servos inside and you are looking for a way to control it, with that service you can. It allows you to test your servo’s movements with sliders. If you have a microphone with your PC you can give voice commands to your servos. OpenCV should be easily installed when you install the software and that will allow you to control with its own vision your robot.

There are tutorials, and maybe some more coming up for easier understanding.

With the help of GroG and Myrobotslab, InMoov is able to recognize voice commands picked up by microphones located in its head (currently connected to the cameras in InMoov’s eyes, but to be moved to the appropriate locations on the sides of its head later on).  In YouTube videos, you can hear Gaël say, “Grab the ball” and the robot will open its hand and clutch something handed to it. 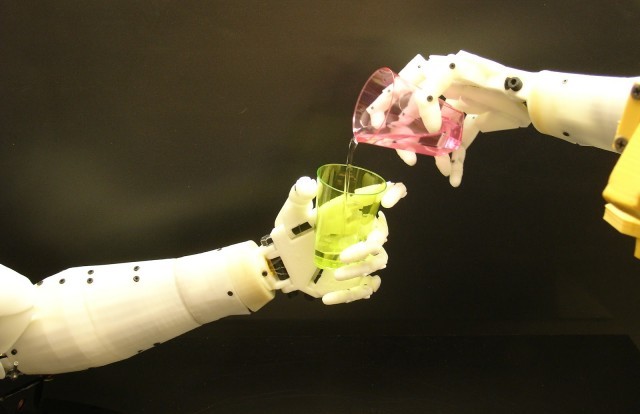 Gaël has also been in a good deal of communication with a user named BAS, who has been posting regularly on the InMoov blog since the project’s inception.  BAS, or Brian, has helped Gaël to troubleshoot a few problems in the building process and even presented his own version of InMoov at the MakerFaire in Pittsburg.  InMoov seems to be proving the age old adage: it takes a village to build a free, open source, 3D-printed robot.  Gaël has told me that there are at least 20 other people around the world printing and building InMoov in their own homes:

I know one in China; he has made the InMoov controlled with a [Nintendo] Power Glove.  I also know a guy in Denmark (who built an orange hand).  One in Russia; he didn’t bother posting a picture on Thingiverse.  A few in Spain, Italy, Canada, Australia, Holland, Greece, Mexico, Poland, France, and most are in the US. But I can’t really keep track. They, from time to time, reach me for some questions and then I find out how far they’ve gone.

It is important that InMoov remain open source, for Gaël.  After MakerBot’s Thingverse changed its legal policies to state that the company owns all models uploaded to the site, the amateur roboticist stopped sharing his files there.  All of the robot’s parts are now located on Gaël’s own site attached to a non-commercial, attribution license.  I asked him why the robot is open source and received an inspiring answer: “I have no idea if it will improve our lives, robots are created by us. They will be our extensions somehow.  Just like any tool, they will be what we want them to become. I trust the human race even if everyday news shows mainly our negative sides.”

After considering the open source nature of the project, I realized that it shares some similarities with the RepRap, the original open source, self-replicating, 3D printer.  Adrian Bowyer, one of the inventors of the original RepRap modelled the printer after the symbiosis found in nature.  Bowyer suggests that, as users are able to replicate the technology for human purposes, they are essentially spreading the seed of the printer in the same way that a bee, in search of nectar, carries the pollen of a flower to another part of the world, aiding the flower in its reproduction process.  It seems that the open source nature of InMoov does point towards the actualization of Bowyer’s idea.  By giving away the designs for InMoov, Gaël has allowed users to modify and enhance the robot – to grow the robot in a way that has mutually beneficial consequences for user and machine.

What is interesting is that, they transform it to do something else with it. The French guy is building some kind of a bartender that serves drinks… The Russian used it to trigger weapons.  The Chinese guy is making hands for his stepfather, who has lost them. The Polish has done other robotics projects before; he also wants to build a complete robot.  The hand has been presented by DesktopFab to the United States Congress to demonstrate the use of 3D printers in universities.

In neoliberal economic theory, it’s often put forth that the invisible hand of competition drives innovation by forcing competitors to outdesign one another to yield the best product, a sort of simplified Darwinian evolution.  What Bowyer’s idea suggests, and what InMoov might prove, is that, in the much more complex evolution of real ecosystems and markets, organisms and products actually develop symbiotically, as well as competitively because, without any market incentive and through the collaboration of non-competing human beings, InMoov has developed the ability to move, to listen, and to assist people.

I asked Gaël what the future of InMoov was.  “As I see it today, it is like a puzzle; I keep adding parts as long it keeps me having fun. Of course making a complete robot would be fantastic, but it’s like a kid’s fantasy.”  He also said that he is always considering some of the practical applications of the robot and sees a lot of potential use for creating fully functional prosthetics.  For Gaël, the development of InMoov seems to have truly been about the process and not the ultimate goal.  He has fun even when things go wrong, when he orders the wrong batteries online or when InMoov mistakes the command “close” (as in, “close your hand”) for “turn”.  And, for me personally, whatever the outcome of the InMoov project, I see Gaël, and ambitious Makers like him, as a model for re-discovering the intrinsic enjoyment of learning, education for the sheer pleasure of new knowledge.

Finally, I asked him something that I’m always thinking about, particularly when faced by a simulacrum representing all of my greatest fears and desires regarding the possibilities of my reasons for existing: “What is reality? What is the meaning of life?” With the response of a Taoist wanting to express no particularly rigid interpretation of the events of the cosmos, Gaël said,

Reality is our world, ground, earth, our planet. I don’t think there is a meaning of life; it is more what you do with your life that makes meaning for the rest of us. A grain of sand on a beach isn’t searching for its own “meaning of life”; although, without him, or them, there is no beach, no earth, no universe.

[1] I had to look this word up. It means someone who is self-taught. Auto = self. Didact = taught.

Working as a sculptor modelmaker for Factices Ateliers, in the real physical world, this is my contribution to the OpenSource 3D world.